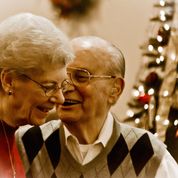 Don’t get angry at the actions of someone that is deeply forgetful. Instead start asking yourself why are they reacting the way they are? How are they feeling (them, not you)?

Bored, frightened, bewildered, apprehensive, anxious and angry. I can say that every one of those words applied to Dotty when I first arrived in Delray Beach to care for her.

It just amazed me how easy it was for Dotty to get out of balance. To get mean.

How simple? Consider this.

Dotty would be standing there with the door wide open on the refrigerator and making a sandwich. She didn’t do it the way most of us do it. We usually take all of the component parts out of the refrigerator, close the door, put every thing on the counter, then make the sandwich.

In our home when you keep the door on our refrigerator open too long, or if the door is ajar, the refrigerator starts beeping. It has an alarm system to alert you that the door is not properly closed.

You ever hear a refrigerator beep for like five minutes? Let me tell you, after 15 seconds it will drive you nuts. You might likely overreact. I did.

When the refrigerator would start beeping away, I would go in to inspect the situation. And there would be Dotty.

I might say something like — let me help you in an attempt to try and get the refrigerator to stop beeping. Guess what happened?

Dotty would get angry, off she would go to her bedroom, get in bed, and refuse to come out for hours on end.

The more I tried to reason with her the worse it became.

All I was trying to do was help, but that is not the way Dotty perceived my actions.

End result, Dotty was angry, upset, betwixt, bothered and bewildered; and I ended up with a sore stomach and sore heart.

I don’t remember reading anything at the time that alerted me to how very fragile Alzheimer’s patients can be; or, how easily they can become confused.

Once confused only one of two things happens: difficult or impossible to deal with; or challenging behavior.

When I offered to help Dotty, I wasn’t doing anything wrong, in fact, I was being nice. Well nice in real world terms. But, not in the way Dotty was then looking at the world.

Finally, I started to look at Alzheimer’s from Dotty’s point of view.

I went into Alzheimer’s World. Soon it became obvious to me that it really didn’t matter what I thought, what mattered was how Dotty felt.

This is when I started to get the hang of it.

What was I doing wrong in the example above.

First, I came scurrying into the kitchen and was more or less, sneaking up on Dotty. Or, scaring her. Like a person hiding around the corner, or jumping out of the closet.

Next, instead of calmly asking her if she would like some help, I jumped right in and more or less told her by my actions, let me do it.

Older people don’t like to be treated like a baby — at least this is what almost everyone of them says. Or maybe they say, I can do it. When they don’t want your help.

The real point is, I started to learn that you can’t sneak up and surprise a person with Alzheimer’s.

Sneaking up means, coming on to the scene at your normal pace with mouth a running.

You have to announce yourself before you get there, and then come in with a smile, and then say something in a nice calm, low voice.

The smile is critical.

You don’t have to get right at the task at hand. In this case making the sandwich for them. You have to ease yourself into the situation, and then and only then, take action.

I think that most of the dementia patients that get bent out of shape, or are difficult to handle are that way because the world around them is moving too fast, and because they often misinterpret our actions.

What do you usually do when someone criticizes you for no good reason? What would you do if someone continued to criticize you over and over, and treated you mean over a long period of time?

Would you give them a great big kiss? Or, is it more likely that you would be mean right back?

This is just a subtle example of how what we might be thinking in the real world —  could be interpreted very differently in Alzheimer’s World.

And, even though our intentions might be loving and caring, they might be interpreted in the exact opposite way in Alzheimer’s World.

I can assure you that much of what we do, full blast, seems threatening in Alzheimer’s World.

Threatening, frightening, and maybe we are being perceived as being angry when we are not.

I will ask you to consider this.

If your Alzheimer’s patient is difficult to deal with, do you think there is any chance that you are the source of the problem? You will probably snap, NO.

Is it possible that your actions are sending a very different signal than you are intending to send to someone that is deeply forgetful?

This answer to that question is simple, if you are human and living in real world you are probably sending at least some signals that are being grossly misinterpreted by a person that is deeply forgetful.

I can assure you of this. Once you start making progress, once the heartache, stomach aches, and venting start to diminish, your brain will let you know you are on to something big.

Don’t get angry at the actions of someone that is deeply forgetful.

Instead start asking yourself why are they reacting this way?

How are they feeling (them, not you)?

Try to start looking at difficult situations from an Alzheimer’s World perspective.

Be kind, be gentle.

Once you get the hang of it, the sun will come out, and the dark clouds over your head will disappear.

The next thing you know, the daily problems start to diminish.